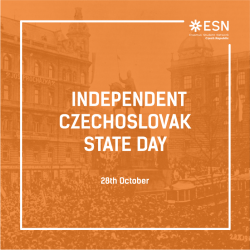 The area of Czechoslovakia had been a part of the Austro Hungarian Empire until the Empire collapsed at the end of the first world war. The Czech speaking areas of Bohemia and Moravia had been under Austrian rule while Slovakia was part of Hungary. Before the first world war, there had been nationalist movements in both the Czech lands and Slovakia. Despite the Czech area being an industrialised region and Slovakia being a mainly agricultural-based country, the two regions took the opportunity to become a new nation. Czechoslovak independence was declared on Wenceslas Square on October 28, 1918, beginning a new era for the two nations. The president of the 'First Republic' was Tomáš Garrigue Masaryk, who was the leader of the nationalist movement outside the Austro Hungarian Empire.

While Czechoslovakia no longer exists – the Czech Republic and Slovakia peacefully separated in 1993 after 75 years together – October 28th is still an important date and a national holiday in the Czech Republic.

On this day, the president of the Czech Republic, together with key members of the government will place flowers on the grave of President Masaryk. In the evening, the Czech president will present honours and awards to leaders of cultural and social life in the Czech Republic. A law that came into effect at the end of 2016 specifies eight national holidays when stores larger than 200 square meters have to stay closed applies to this holiday.