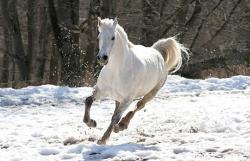 The legend about Martin, the Whitehorse rider

The 11th November is a day, which is celebrated as the day of St. Martin. Traditionally, this day is connected with the first snow falling, feasting and the first wine made from the last harvest. St. Martin's Day is undoubtedly one of the most popular Christian holidays. Many associate it with the first snow (which is supposed to be symbolically expressed by Martin's white horse), a tasting of young wine of a slowly ending year, and a baked juicy goose.

The nice thing about legends is that they are colourful stories that may or may not be based on truth. They bring with them a message, a lesson and sometimes a reason to think a little deeper. And there are even a few legends associated with St. Martin.

Martin and the white horse

The real Martin from Tours, even though he was a soldier, did not ride a white horse at all, he ate and lived modestly. Therefore, it is important why food and drink are associated with his name. The legend of the white horse, on which Martin arrives and carries his first snow, arose quite prosaically. Over the years, people have simply noticed that the first snow always comes in time around St. Martin's Day – they linked his name with a white horse, symbolising the first snowflakes.

St. Martin's wines are the first wines of the new vintage. These are fresh and fruity wines, which have matured for only a few weeks, but during this time it has only gained their distinctive character. Winemakers recommend that young wines be drunk until Easter when they retain their pleasant freshness

Origin and tradition
Probably everyone has St. Martin's wine associated with St. Martin's feast, during which roast goose and cakes are served in addition to wine. But where did this tradition come from and how old is it?

Quite a lot. St. Martin's wine already wore its name during the reign of Emperor Joseph II. It was the beginning of November that marked the end of year-round work for the peasants and the manor for the then winegrowers, and thus a reason to celebrate and feast. And during them, of course, it was customary to taste the new harvest.

The tradition of opening and tasting the first wine eventually merged with the feast of St. Martin, which falls on November 11. And St. Martin's wine was born! In our modern history, St. Martin's wine has been officially produced since 2005. Due to its considerable popularity, they have had the honour of tasting it in Slovakia or distant Japan.