The magical day of Burning Witches 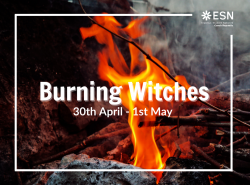 One of the most magical nights of the year is approaching. The burning of witches was celebrated by the ancient Celts, who said goodbye to the winter and welcomed the spring. Since then, the holiday has undergone many changes and Christianity has signed on it. Join us in the history of burning witches and find out more about witch trials in our country.

The night of April 30 to May 1 is a significant date. It is on the calendar between the spring equinox and the summer solstice, and since time immemorial it has been attributed to magical power. The Celts also celebrated one of their most important holidays at this time - Beltine, which marked the beginning of the calendar summer and with it a festival of joy and life.

Some people believe that if they are not careful tonight, they will be overcome by evil forces and look for a way to defend themselves from them.

Where does the burning of witches come from?

The Beltine means bright, radiant fire. It was a fire that used to be a very mysterious force for people, and at certain moments it had magical powers. The Celts worshipped the sun god Belen by the fire. On the eve of this holiday, the Celts put out all fires because they believed that everything bad should end in them. Subsequently, they lit new fires so that everything could begin clean, spotless, anew. The people of the fire offered sacrifices to the gods to secure their favour.

Apparently from this holiday comes a much younger habit - burning witches, which people maintain to this day. The fires most often burned on the hill behind the village, probably because the smoke had witches, and therefore all the evil, to drive away as far away from home as possible. Smaller municipalities or associations usually organise "witches" as an event for the general public. The most important part of the tradition is the burning of a witch's dummy located in the middle of the largest fireplace. The fire includes a grand opening, accompanied by live music, toasting and feast.

Today, large fires are not lit due to a sense of protection from evil forces, however, even in modern times, the witch's evening does not lose its mysterious character. Conversely, even after centuries, it still retains its social importance.